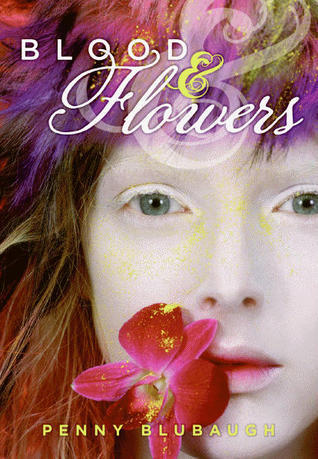 Blood and Flowers is a Cybil Nominee for 2011.

Blood and Flowers is an ALAN Review pick for May 2011.

As in Serendipity Market (2009), Blubaugh blends the magical and mundane into an original fantasy, told here by an 18-year-old who finds a home among an eclectic group of human and faerie folk. With a “penchant for dropping out of school” and “a mile-wide love of Shakespeare,” Persia left her “drugged-out, fey-bashing parents” a year ago to join The Outlaw Puppet Troupe, known for its fringe, slightly subversive underground performances. Finding The Outlaws was “like coming home to the place” she’d “been looking for forever.” Persia’s unidentified world is rife with illegal pixie-dust dealing, a tumbling economy and environmental troubles. Fey-phobic authorities blame the faerie for everything bad, and The Outlaws are prime suspects with a faerie puppet-maker wielding magic behind the scenes. When their gay artistic director is subpoenaed on false charges by Major, his corrupt, vindictive ex-lover, The Outlaws flee their world of blood and flowers into Faerie, a practically perfect place. Here they assimilate with local faeries, trolls and griffins, until Major appears to deliver an ultimatum. To avoid becoming “a lost bunch of misfits,” The Outlaws stage what could be their final production. While the denouement feels anticlimactic, atmospheric language, arresting “culture mash-up,” unique characters, an alluring overlap of fantasy and reality and strong themes of family and friendship create a provocative read. (Fantasy. 12 & up) 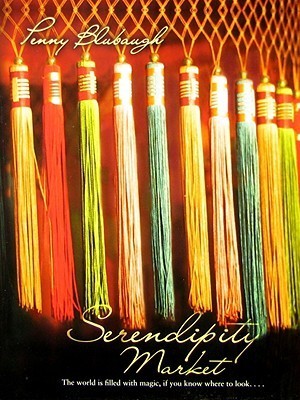 Serendipity Market is a Kirkus Reviews Best Book of 2009

Stories make the world go around in Blubaugh’s debut novel. Sometimes, when the world tilts off its axis, only the magical power of story can put things back to right. That’s where Mama Inez steps in. Using her gift of entering people’s lives in subtle yet mysterious ways, she gathers an eclectic group together for a night of storytelling. Each invited guest provides a talisman and a story, and together they set the world back to its rightful state. Weaving together unique variants of traditional tales, such as The Princess and the Pea, Wynken, Blynken, and Nod, and Cinderella, this beautiful novel will be a delight to those who enjoy spin-offs of fairy tales and folktales. Readers will find themselves flipping back and forth to figure out how all the different stories hidden in the fold come together to form the greater whole of this charming book.

Review for Blood and Flowers
Word for Teens

The cover for the Polish version of Blood and Flowers.
Loading…}